We promised a baby in December. Life had different plans, and our baby came a whole trimester early. Cooper was born on September 18th at 14⅞ inches and 1lb 13oz. The circumstances around Carly and Cooper’s health prompted us to keep the news mostly private until he came home.

Since then, we’ve spent hours every day with Cooper in the NICU, helping with his care and growth leading up to today. After almost four months, Cooper has grown to 8lbs. He’s eating and breathing well. His doctors approved his discharge yesterday, just in time for my birthday. Welcome home, Cooper!

Cooper was born by cesarean while Carly was under full anesthesia. After Cooper was delivered, they let me back into the OR just to cut his umbilical cord. Immediately after, we moved up to the NICU where they cleaned him up and got hooked him to support equipment. 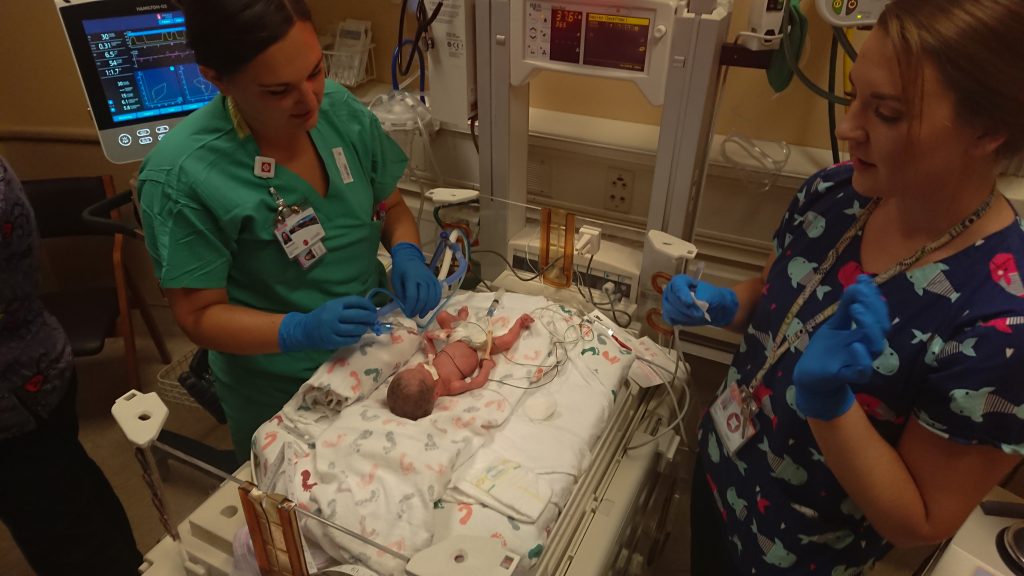 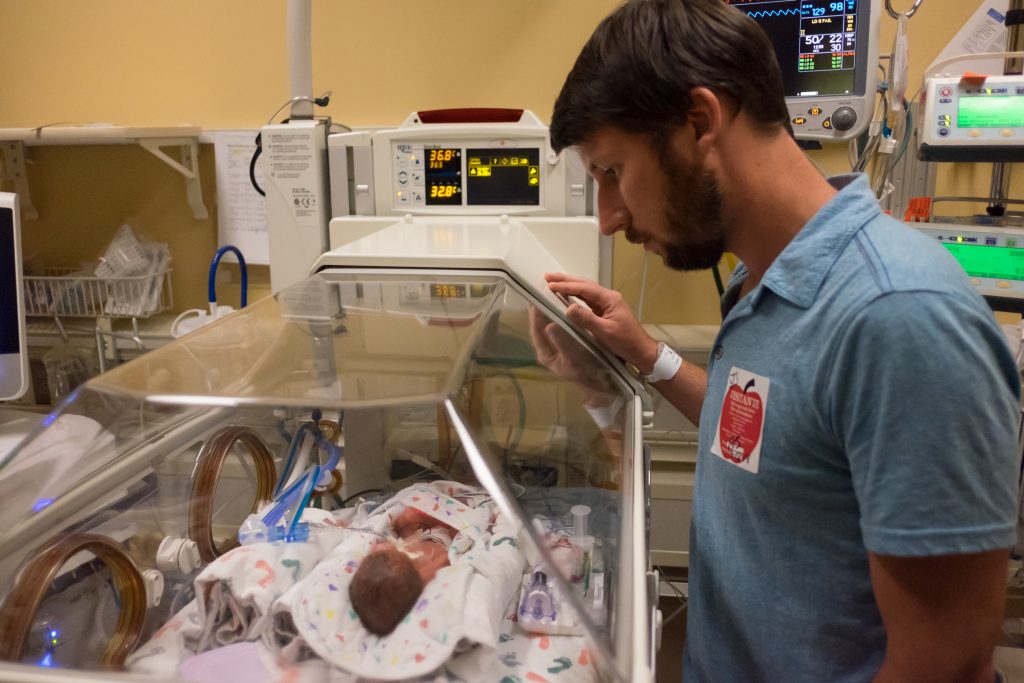 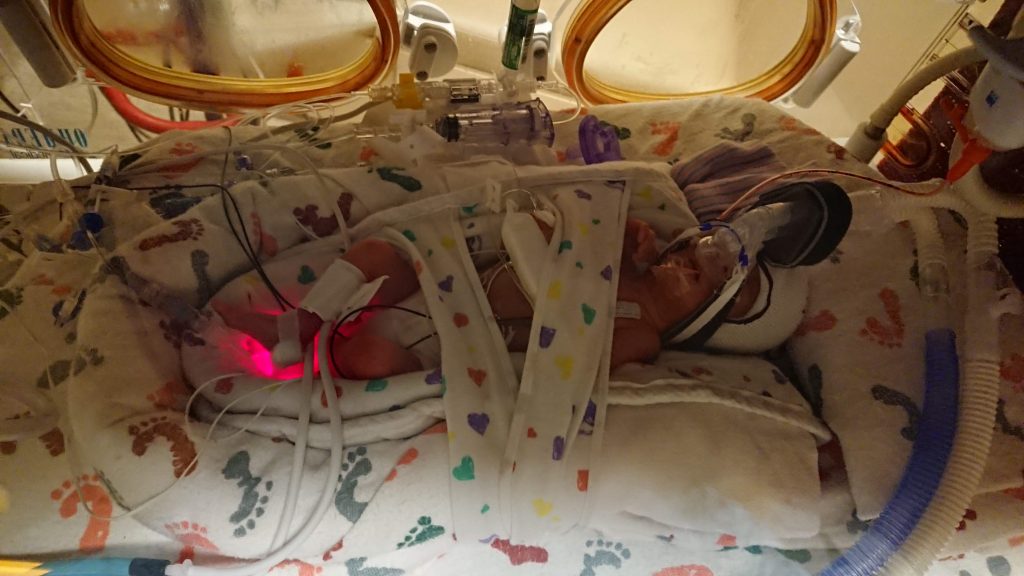 Carly was able to make a visit the day after. This blue light was help against jaundice. They only used this for a week or so. 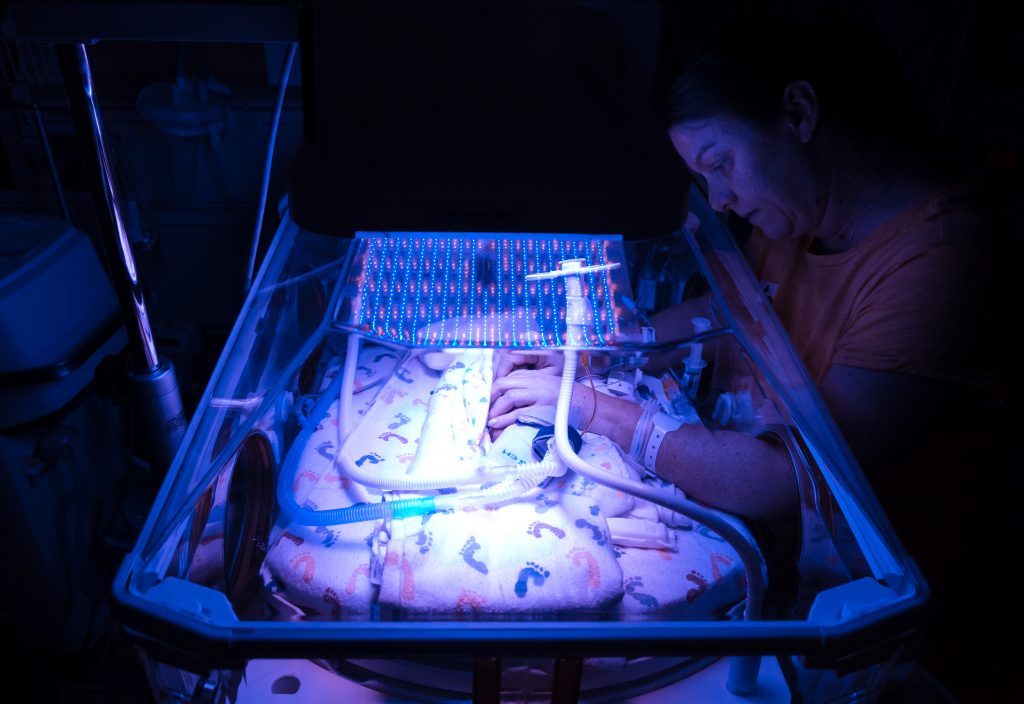 Here’s the full rack of Cooper’s initial equipment. We went on to get very familiar with all of these. The each have their own sounds and warnings. Funnily enough, the one that sounds the most concerning is also the most benign. The first time we heard it, we thought something was seriously wrong, but no, he had just finished eating. 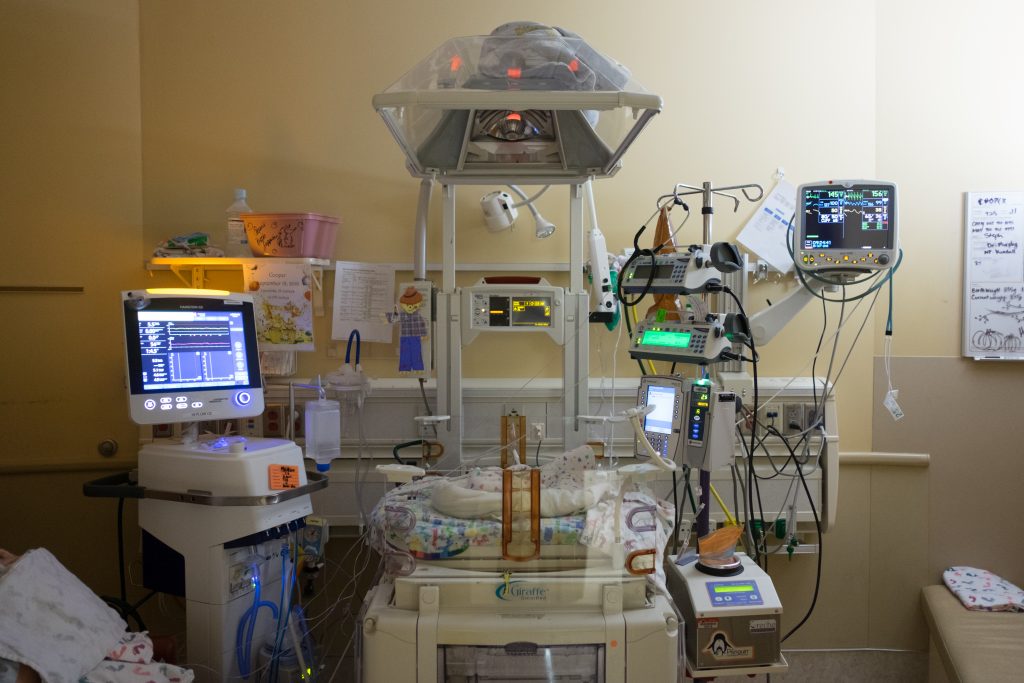 My first time holding Cooper. He was so small and fragile. I was always a bit nervous handling him when he was this little, but only while moving from his incubator to my chest. We did a lot of skin-to-skin. He’d nestle in, and then it felt like the safest place in the world for him. 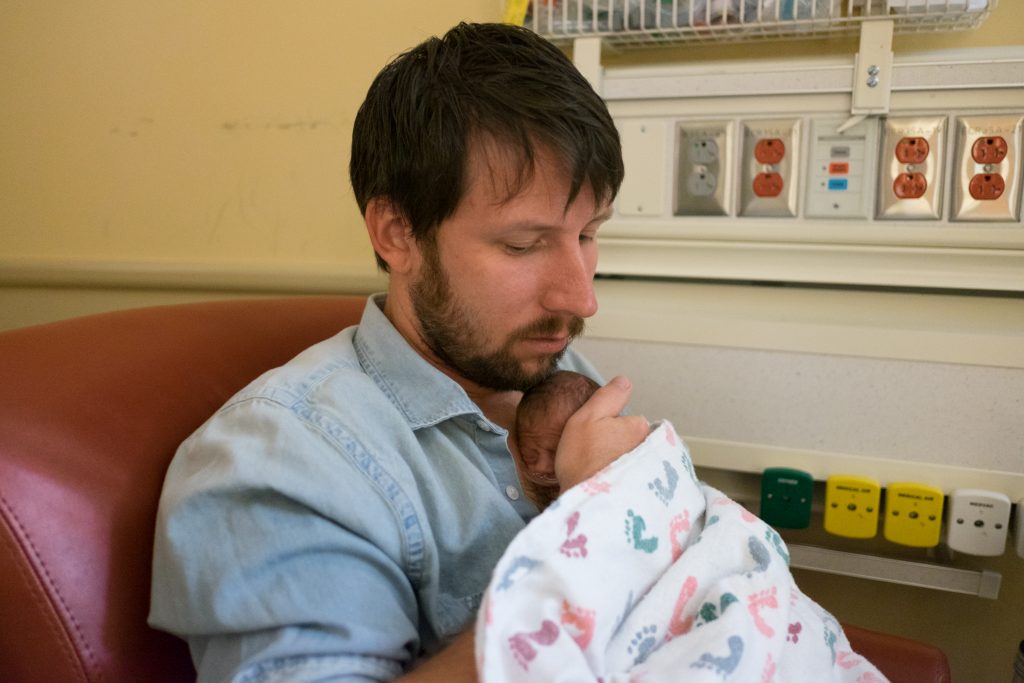 Here’s our first solo bath. We went on to do this every 3 days for the rest of his stay. 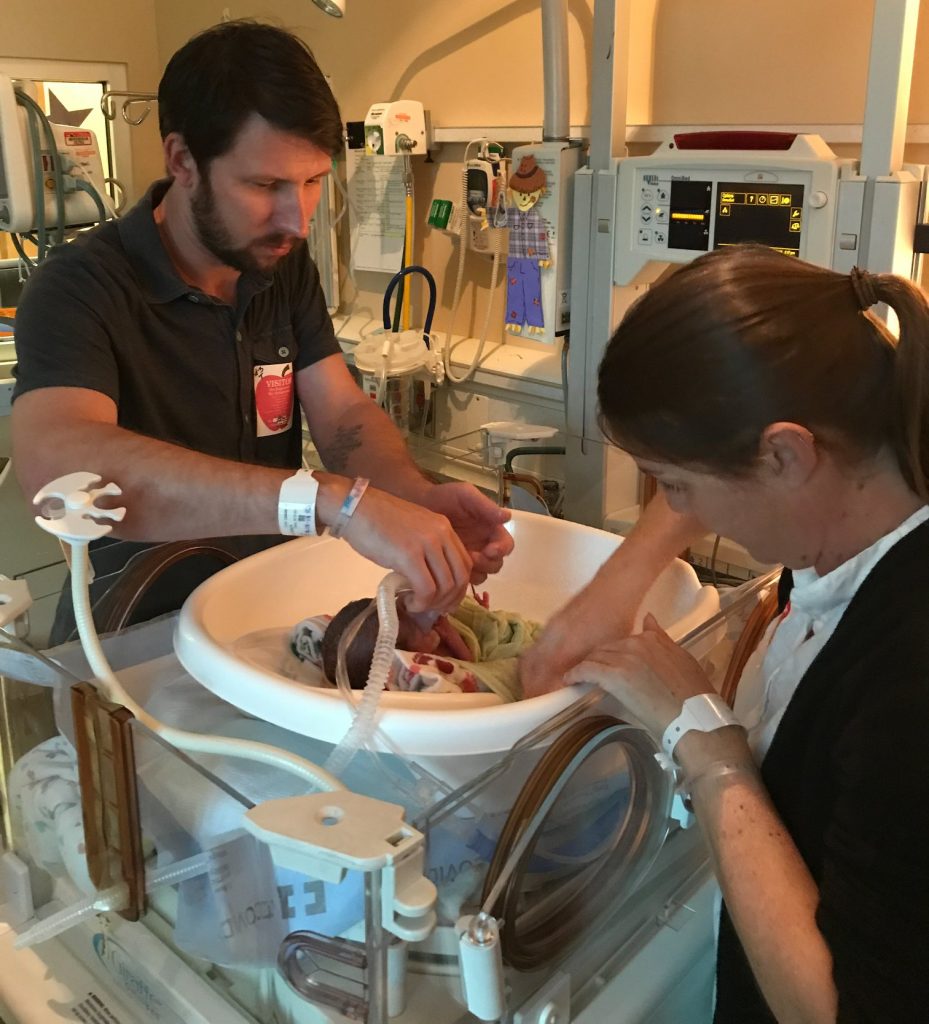 First day in clothes! It was an odd surprise because I somehow was thinking he wouldn’t ever be wearing clothes in the NICU. 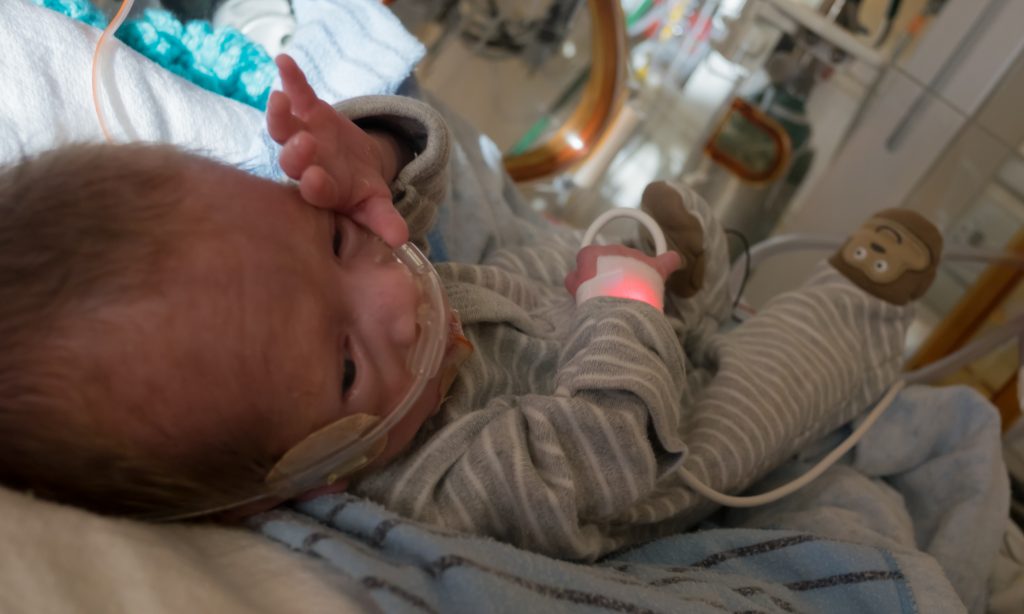 Carly’s coworkers made this amazing Super Cooper outfit for Halloween. 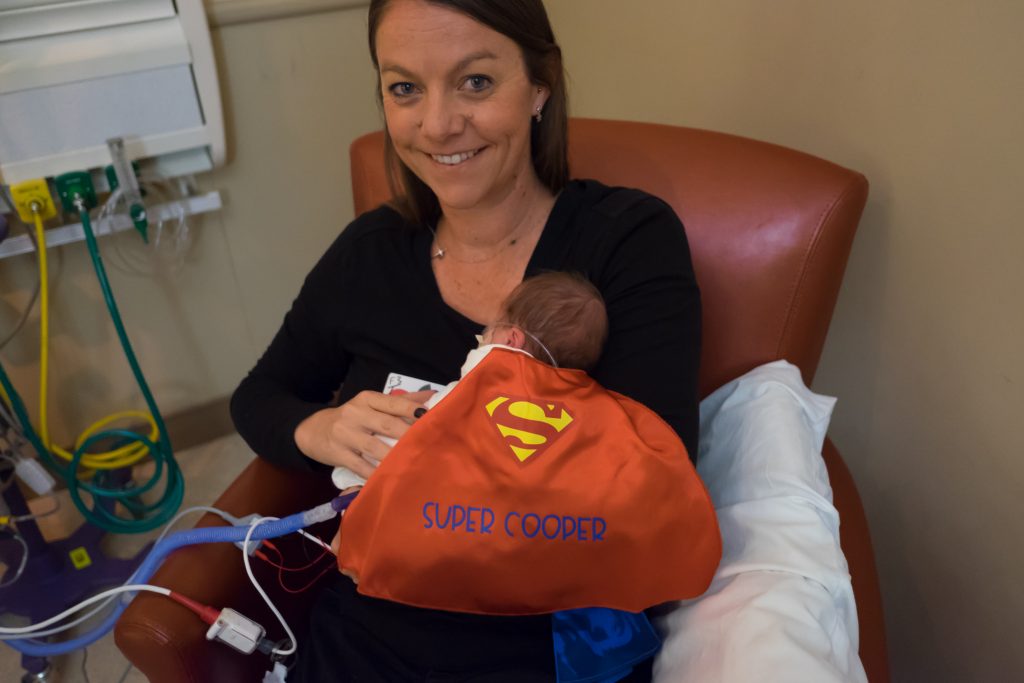 In another milestone, Cooper’s isolette was replaced with this crib. He didn’t need the humidity and temperature controls anymore. 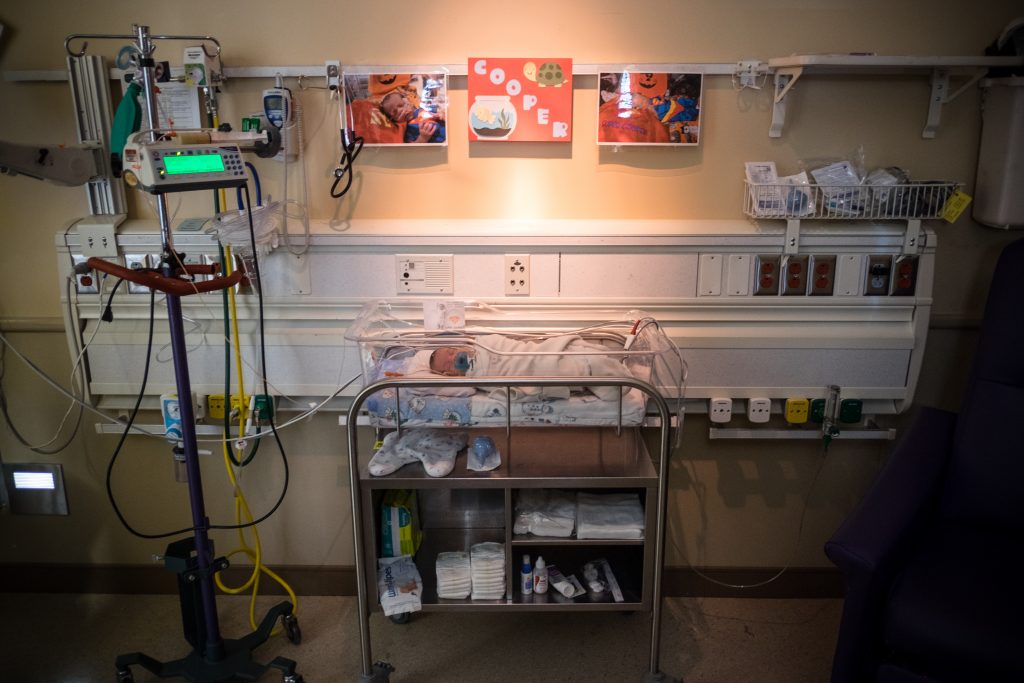 Carly’s parents came in for a visit over Thanksgiving. As much as they like being grandparents to our dog, I think they appreciate the upgrade. 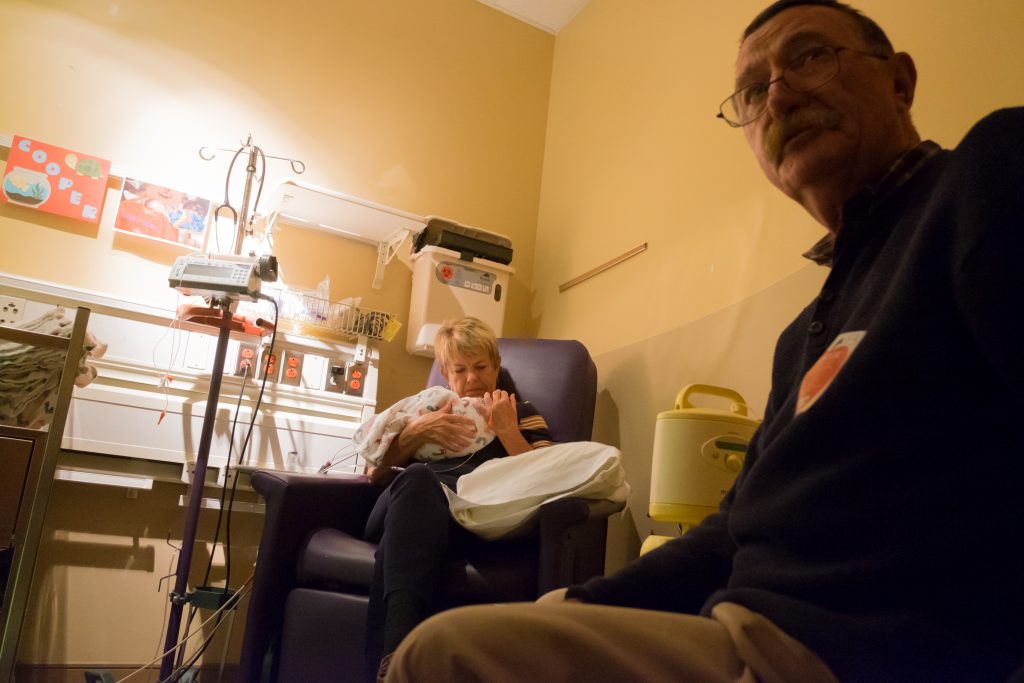 Cooper started playing around this time. Here he is grabbing at his mobile and pulling on his knit octopus’ legs. 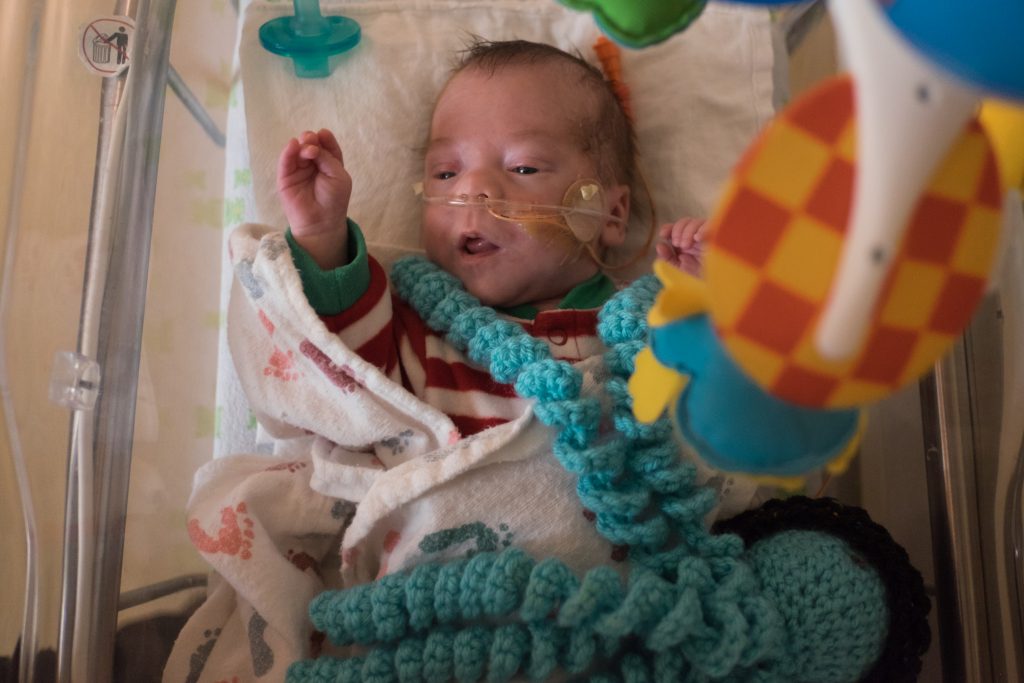 Here was Cooper’s home for most of his first 4 months. He had some windows overlooking a park. I’d often sit at the desk and work while Cooper got some rest after his morning cares.

I made a name for myself as the bottle master. He would always eat a healthy amount when I fed him, and for a while there, not so much for anyone else. This caused some problems in weening him off his feeding tube. We kept going with Carly making the milk and me feeding it to him. 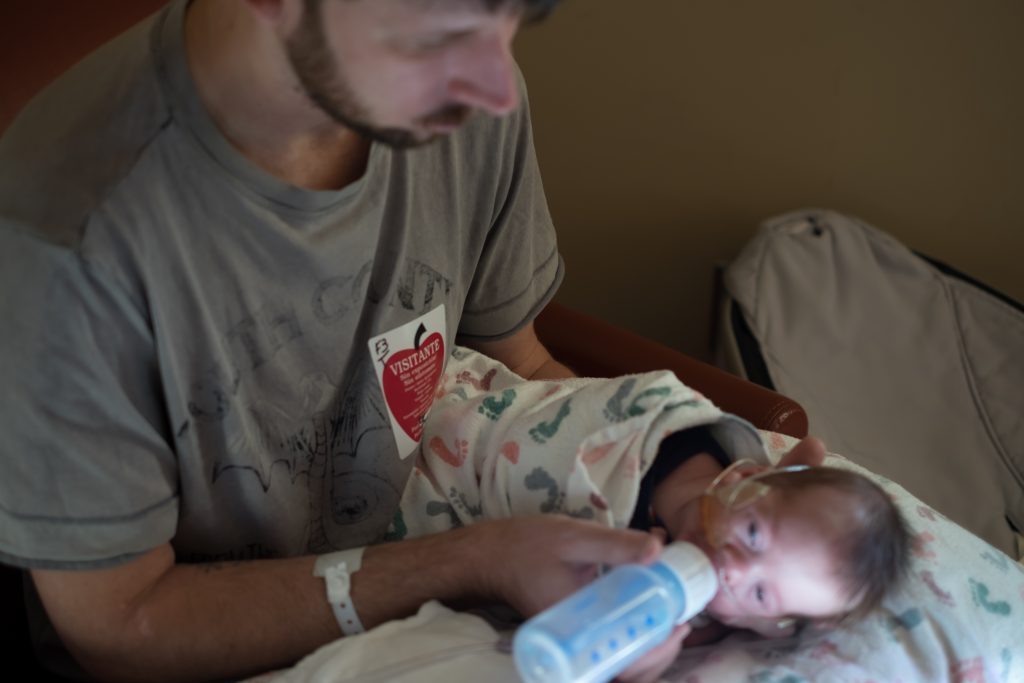 Santa came in for a visit to the NICU. I was a little worried that Billy Bob Thornton was going to show up to hold the babies, but it was the head guy over the cuddler program in the NICU. This is a nice program where a group of volunteers come in to help soothe babies that need some extra attention when their parents aren’t there. I’ve come in to find our own neighbor holding Cooper early in the morning. 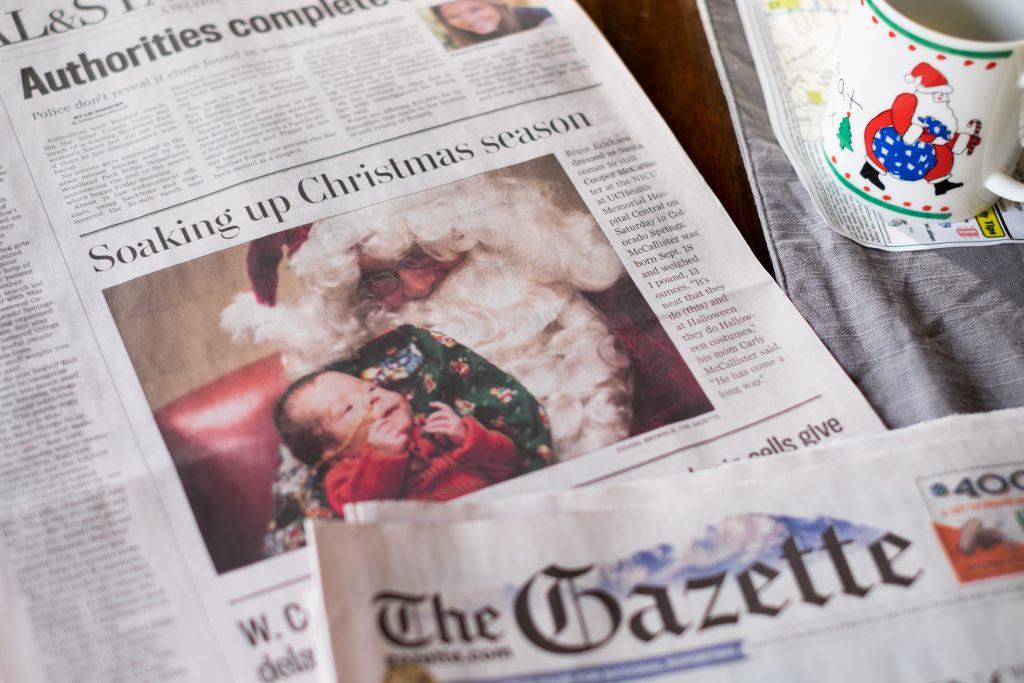 My parents came in for a visit for Christmas. My mom says Cooper’s beautiful. She has good taste. 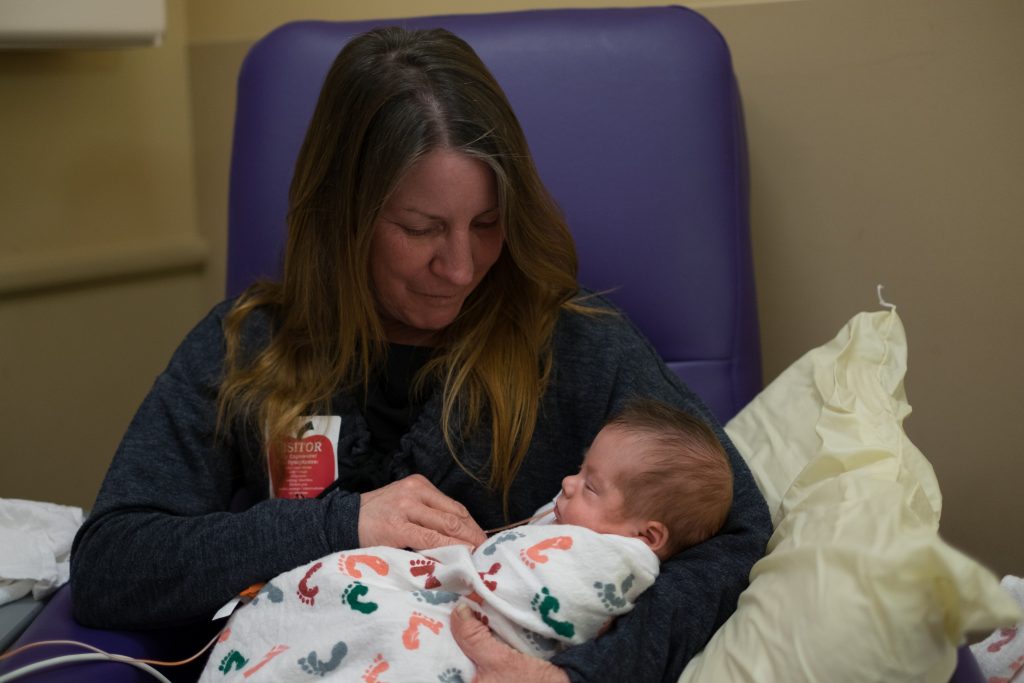 We had a few outfit changes on Christmas. Here’s my favorite for Lil Cooper. 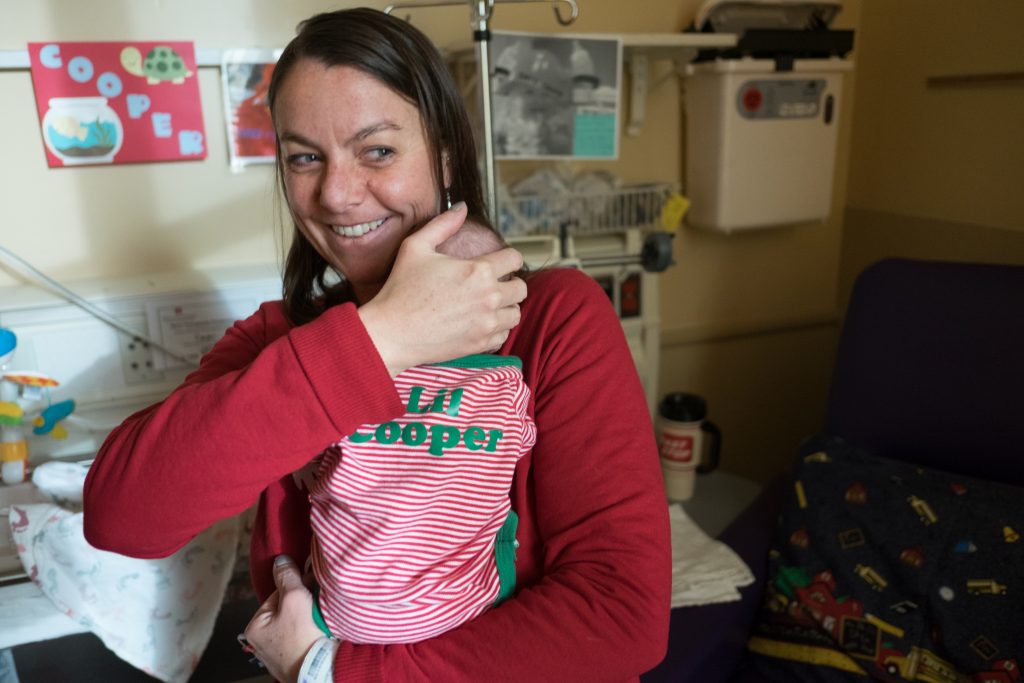 Baby gym involved some stretches and rollovers and sitting up. No pain, no gain, Cooper. ( : It wasn’t actually bad. He enjoyed most of it. 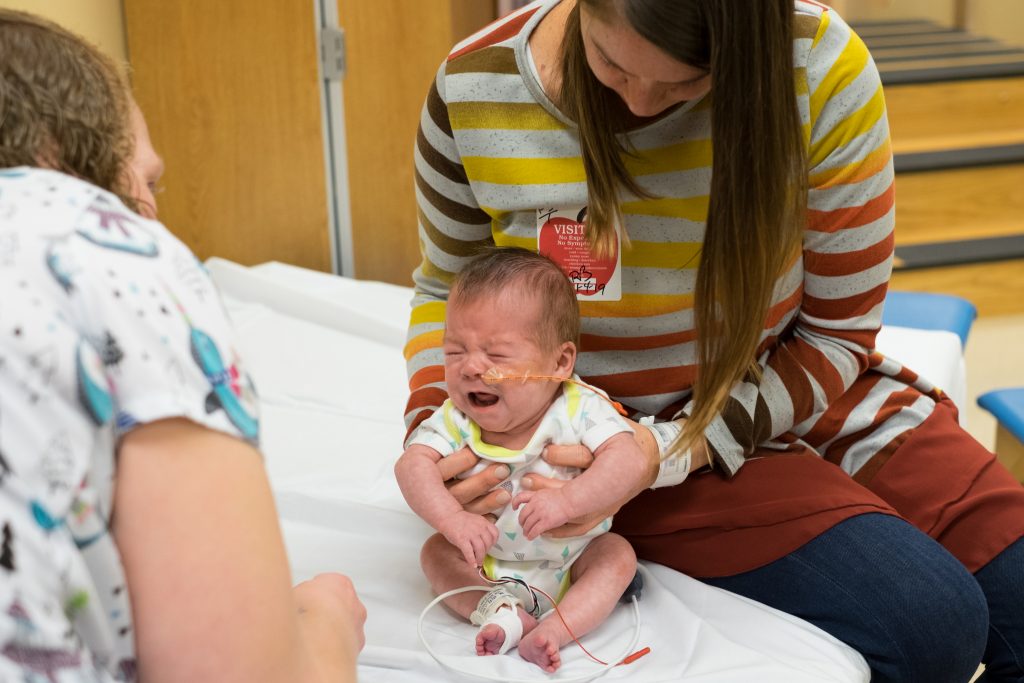 Cooper works hard to cross over his giant travel pillow. I think he’ll be crawling before we know it. 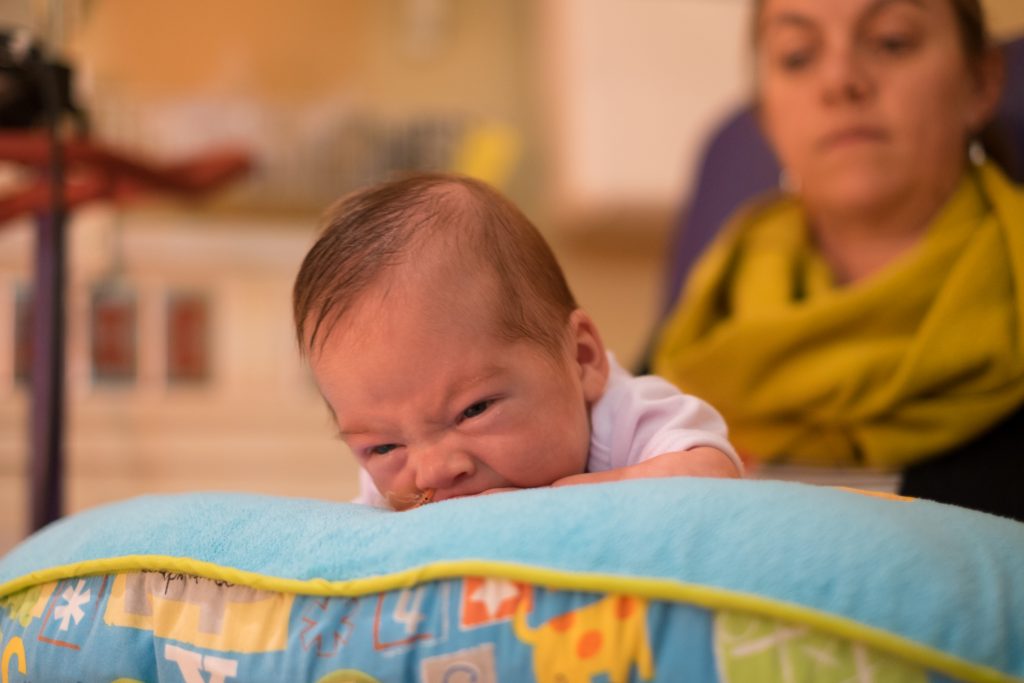 Here’s Cooper’s return from surgery. This was a minor procedure to repair a hernia, which is pretty common. It was worrisome regardless, but we were always told this procedure would come right before discharge, so it was a bittersweet day for us. 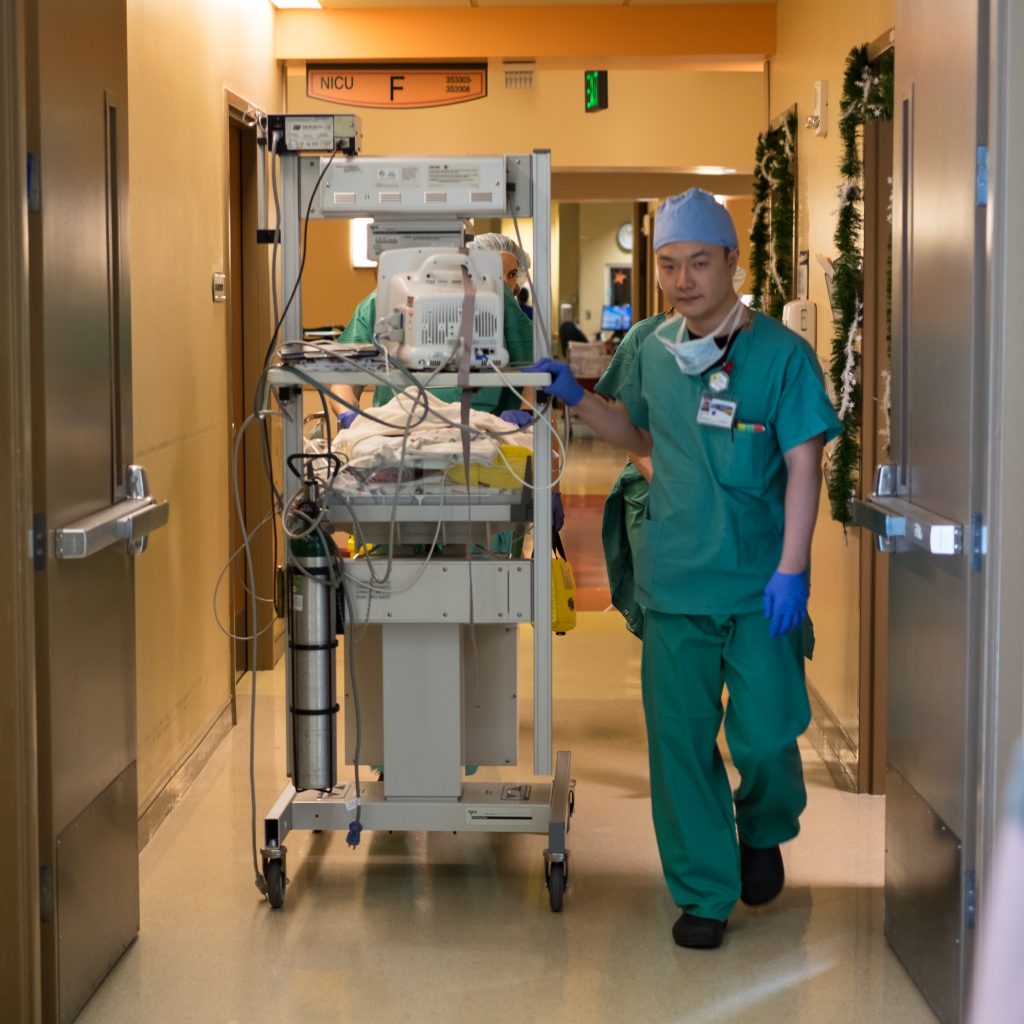 I’m not the only bottle master anymore. Cooper’s happy to take a full bottle from Mom now too. 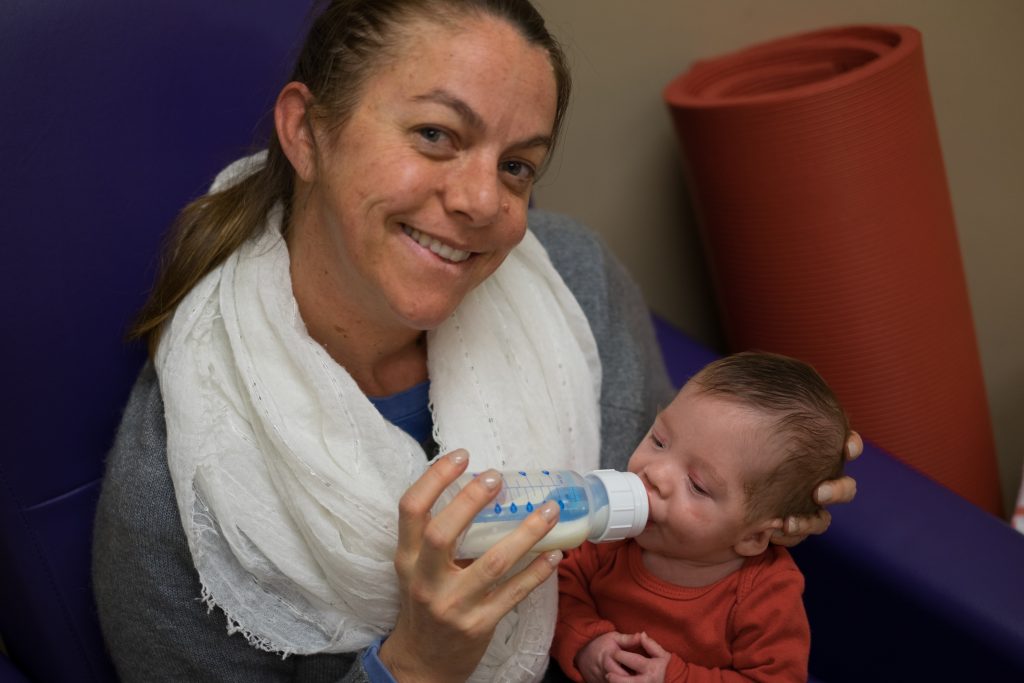 Dr. Kiley is one of Cooper’s neonatalogists. He gave the word to send us home, but not before coming in to give his goodbyes. The whole staff deserves endless gratitude. Over the months, there were around 50 different people with varying specializations that worked with our boy. We wouldn’t be here together now without them. 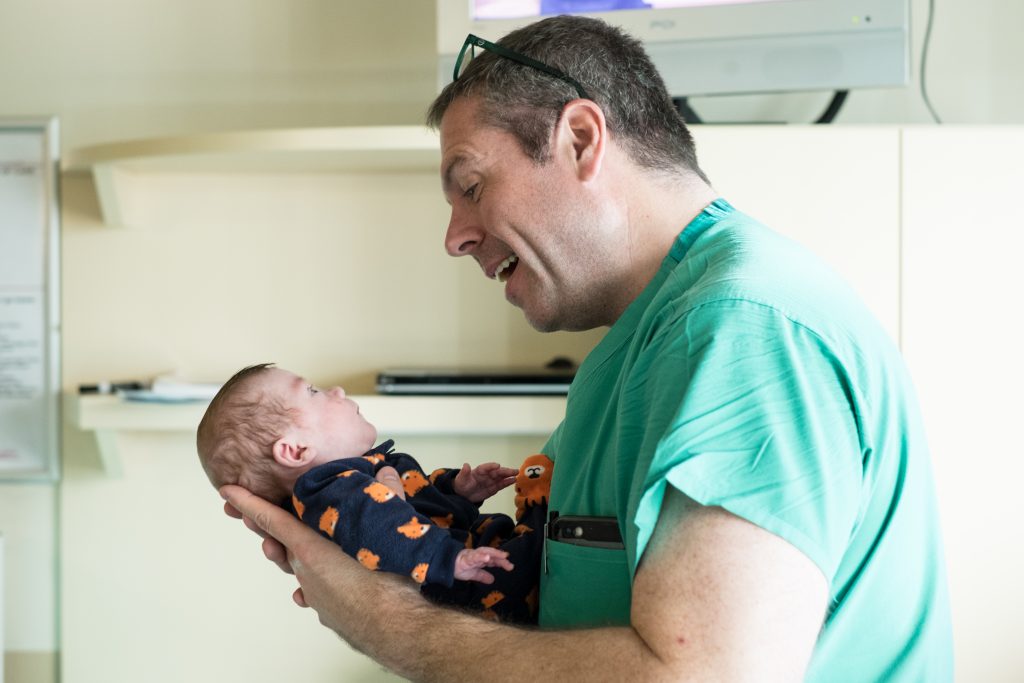